Check out the cover of A BOY LIKE YOU by Ginger Scott! Don’t forget to preorder your copy today!

A BOY LIKE YOU
NA Contemporary Romance -First part of Like You Duet
Scheduled to release: March 3, 2017
Goodreads

They say everyone’s a superhero to someone. I’m not sure who I’m supposed to save, but I know who saved me.

We were kids. His name was Christopher. And up until the day he pulled me from death’s grip, he was nothing more than a boy I felt sorry for. In a blink of an eye, he became the only person who made me feel safe.

And then he disappeared.

Now I’m seventeen. I’m not a kid anymore. I haven’t been for years. While death didn’t take me that day, the things that happened left me with scars—the kind that robbed me of everything I once loved and drove me into darkness. But more than anything else, that day—and every day since—has taken away my desire to dream.

I wasn’t going to have hope. I wouldn’t let myself wish. Those things—they weren’t for girls like me. That’s what I believed…until the new boy.

He’s nothing like the old boy. He’s taller and older. His hair is longer, and his body is lean—strong and ready for anything. I don’t feel sorry for him. And sometimes, I hate him. He challenges me. From the moment I first saw him standing there on the baseball field, he pushed me—his eyes constantly questioning, doubting…daring. Still, something about him—it feels…familiar.

He says his name is Wes. But I can’t help but feel like he’s someone else.
Someone from my past. Someone who’s come back to save me.

This time, though, he’s too late. Josselyn Winters, the girl he once knew, is gone. I am the threat; I am my worst enemy. And he can’t save me from myself.

Ginger Scott is an Amazon-bestselling and

Goodreads Choice Award-nominated author of several young and new adult romances, including Waiting on the Sidelines, Going Long, Blindness, How We Deal With Gravity, This Is Falling, You and Everything After, The Girl I Was Before, Wild Reckless, Wicked Restless, In Your Dreams, The Hard Count, and Hold My Breath.

A sucker for a good romance, Ginger’s other passion is sports, and she often blends the two in her stories. (She’s also a sucker for a hot quarterback, catcher, pitcher, point guard…the list goes on.) Ginger has been writing and editing for newspapers, magazines and blogs for more than 15 years. She has told the stories of Olympians, politicians, actors, scientists, cowboys, criminals and towns. For more on her and her work, visit her website at http://www.littlemisswrite.com.

When she’s not writing, the odds are high that she’s somewhere near a baseball diamond, either watching her son field pop flies like Bryce Harper or cheering on her favorite baseball team, the Arizona Diamondbacks. Ginger lives in Arizona and is married to her college sweetheart whom she met at ASU (fork ’em, Devils). 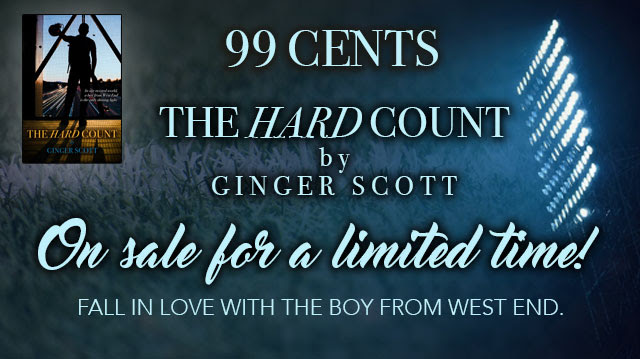 The Hard Count by Ginger Scott in now on $0,99 SALE for a limited time! It was one of my TOP READS of 2016!! I highly recommend it! <3
Synopsis
Nico Medina’s world is eleven miles away from mine. During the day, it’s a place where doors are open—where homes are lived in, and neighbors love. But when the sun sets, it becomes a place where young boys are afraid, where eyes watch from idling cars that hide in the shadows and wicked smoke flows from pipes.

West End is the kind of place that people survive. It buries them—one at a time, one way or another. And when Nico was a little boy, his mom always told him to run.

I’m Reagan Prescott—coach’s daughter, sister to the prodigal son, daughter in the perfect family.
Life on top.
Lies.
My world is the ugly one. Private school politics and one of the best high school football programs in the country can break even the toughest souls. Our darkness plays out in whispers and rumors, and money and status trump all. I would know—I’ve watched it kill my family slowly, strangling us for years.

In our twisted world, a boy from West End is the only shining light.
Quarterback.
Hero.
Heart.
Good.
I hated him before I needed him.
I fell for him fast.
I loved him when it was almost too late.

When two ugly worlds collide, even the strongest fall. But my world…it hasn’t met the boy from West End.

My Top Reads of the Year